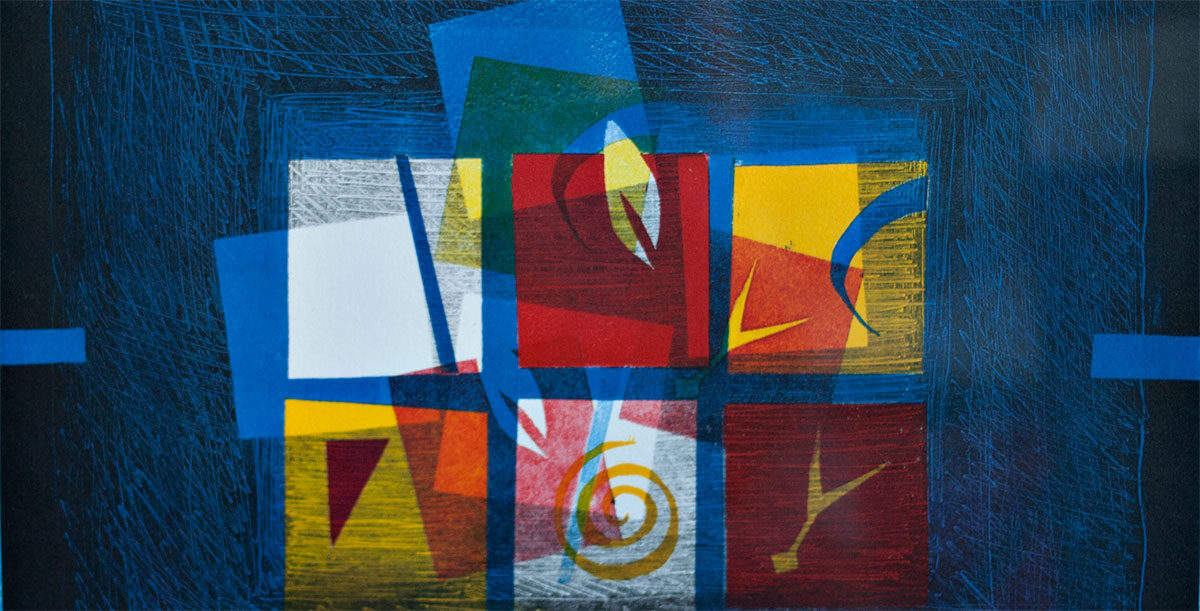 I jump, keeping focus on the stone ahead, where I hopefully will be able to land my foot. It was easier when I started my art journey in the late seventies, – in that sense. I made a quick sketch. Based upon the sketch I would develope a picture. Very often using several plates printed on top of each other, all of them corresponding to the baseplate, making one consistent work of art. In the eighties it was even possible to survive by printing editions.

My plates have transformed over the years, ending up as fragments, open for different combinations. This has influenced my approach to paper as well, making the plate and the paper equals. Paper is no more a landing base for a finished print, it is part of the process from the very beginning. 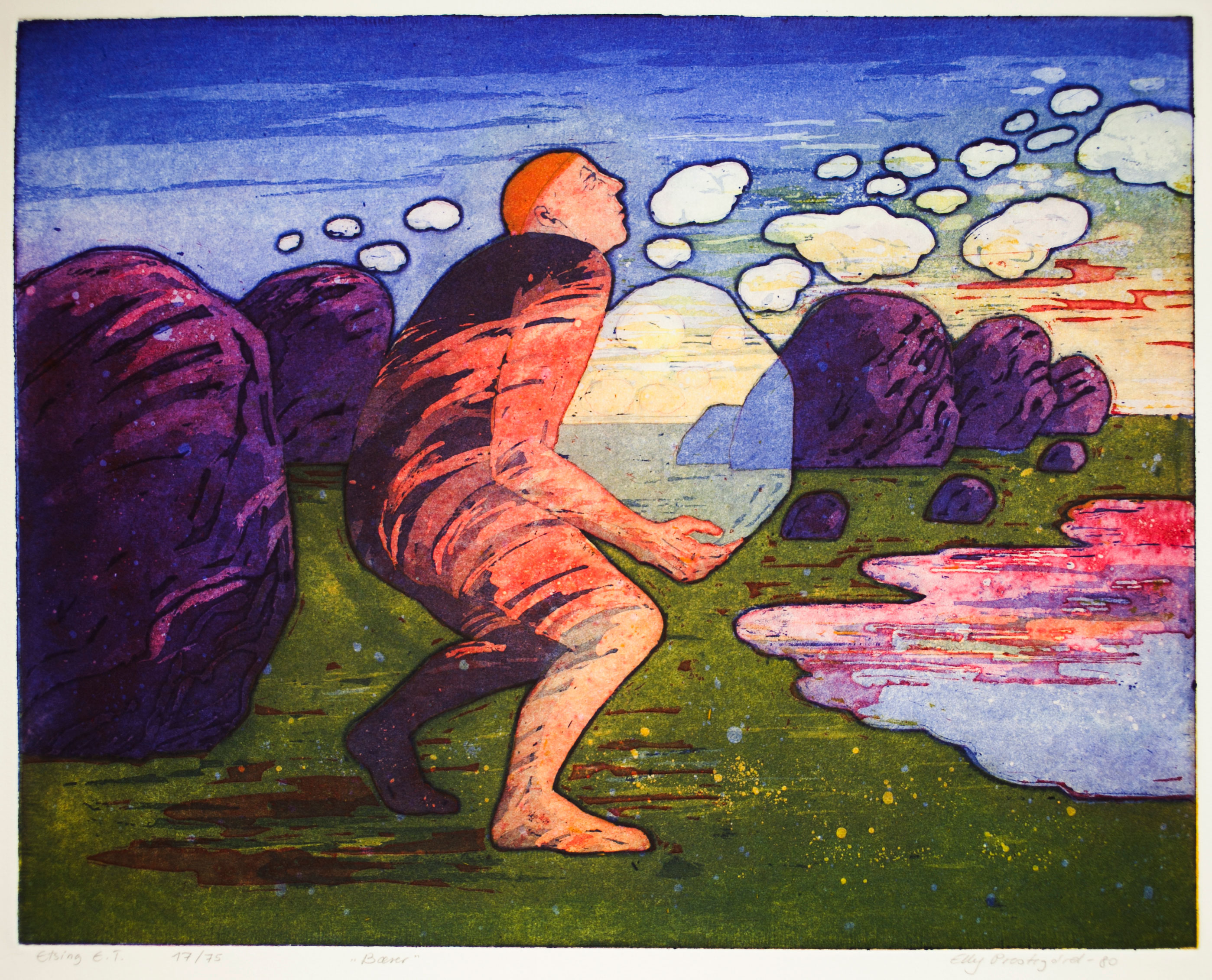 PICTURE: This blogpost already feels like a start of an interesting retrospective for myself. Every day I start my creative day in the shower, and today I lost myself wondering about clouds, how they as a metaphor can take us anywhere, and then the differences between clouds and fog – brainfog taking us nowhere. This Sisyfos is definitely into clouds, carrying his heavy weights. So yes, clouds can take us anywhere, depending on ourselves. This is a three plates etching from 1980.

PICTURE: No “rules” without exceptions. I started out describing how I created my prints. My plates have transformed over the years, ending up as fragments open for different combinations, but in this series from -78 I actually did the same. Back then I worked with metal plates, and naturally they cut square, and not organic as now, caused by plastic plates being easy to cut with scissors. So actually, the step between the etchings and the monoprints is not as long as I first thought. There will always be these hidden lines connecting everything we do. I use to describe my journey as walking in circles, and already I can see circles forming. This series meant a lot for me, and I will certainly come back to it “pretty soon”.

PICTURE: After years working with plates, I took a step sideways, changed my angle, and ended up exploring the possibilities of the monoprint. I never looked back. I could dive into endless possibilities, and instead of working, I found myself playing. Plastic had entered the scene! Every day I would go to my studio without knowing where I would end up, eager to explore new possibilities – beyond my references. If I by the end of the day could surprise myself, it definitely was a sucessful workday. Still is!

In 1993 I had a commission for an oil rig; Norwegian Shell, Draugen. I was asked to make one single piece of art moving through three rooms, separated by glass walls, totally 20 meters long. The works would be laminated, as bathroom panels in a Swedish factory, and mounted on boards. There were limits. I should use a special paper produced by the factory, and the paint should be waterbased and applied in thin layers. This paper had it´s possibilities, but also a lot of limitations. It was brittle and cracked very easily. So, of course I had to challenge the material given, and the whole process. I started experimenting, adding heavy layers of paint, collaging in layers etc, ending up changing the required paper with washi/Japanese paper on rolls. Just before I had been working with spray paint on paper, using grit as my raster, and I transferred this technique to the thin washi. Samples were sent to the factory, and even though I had broken all rules, it worked out!

I bought two rolls of washi, each 10 meters long – placed them outdoors and started spraying in one end, rolling it out as I moved on. The most challenging was actually living in Bergen, depending on dry weather, and working on a material that definitely would be damaged in rain. As a result I only saw parts of the frieze as I worked my way through the 20 meters. I did not even have a sketch, but thinking as a printmaker I had my stencils. I had cut a lot of different stencils in sturdy board before starting out, and trusted this would be all I needed. It was. Actually, I did not change anything afterwards. When I sprayed the last meter it was done.

Back then we had no digital camera, no mobil phone to document the process. So, unfortunately I don´t have a good, professional documentation of this commission. I have, as best I could, linked the pieces together to one long frieze, based on rather low quality photos.

PICTURE: There were three rooms; the tv room, the smoking room, and in the middle the billiard room. Please follow this link to see the whole commission.

I keep jumping. My ground is not solid rock, but stones peaking up from water. Moving forwards I have to jump from one stone to the other, only one foot touching ground at a time.

Making art craves courage. Being a child too – moving into a world of unknown dangers and joys would not be possible without the power of the play. This childhood tool I always bring along when starting a journey.

I still jump. It is my way of moving forwards. The stones are not as visible any more, and the water is deeper. Soon turning seventy I have not ended up on a safe beach. My plates are fragmented. The paper has changed from being “a good choise for a print” to having it´s own voice – also fragmented, down to fibers. Nature in micro and macro is always the backdrop, even though the connection is not always as obvious, – some times stripped down to markmaking and signs. It is no exaggeration to say I often feel insecure in front of the complex possibilities, doubting the ground – but I still jump.

Exploring the power of the visual language by means of paper and plates, there is no map – only experience and intuition fueld by tons of curiosity. 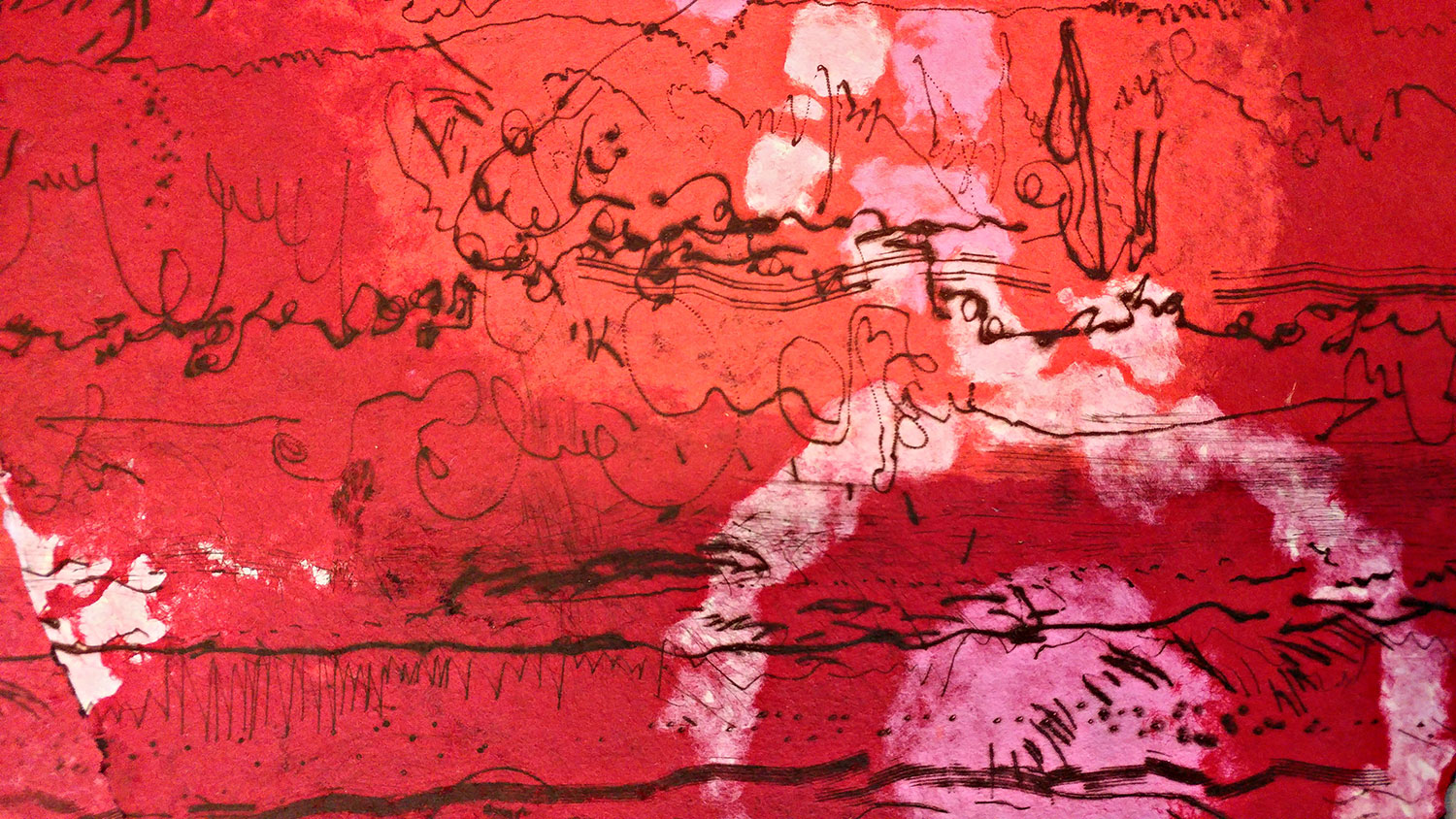 Naturally, in between “now” and “then” a lot has happened. Breaking rules, changing viewpoint, exploring the visual language, – and suddenly I realize I have been trying to frame my art journey in a single blog post.

Feels like it is time to take a glance over the shoulder. So stay tune, and I will return with some stuff from the drawers.